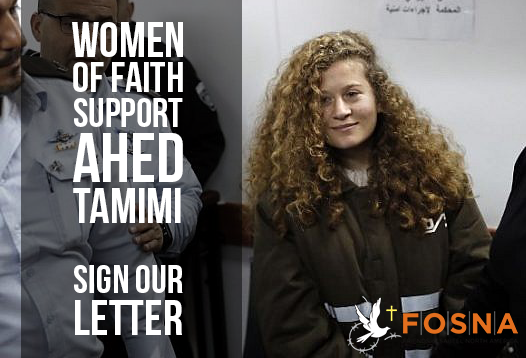 We call on women of faith, from all denominations and religions, to sign on to the below letter from Unitarian Universalist minister Rev. Amanda Weatherspoon. Rev. Weatherspoon went on our Living Resistance: No Child Behind Bars speaking tour against child detention from the U.S. to Palestine in January of 2017. Read her letter on Ahed's situation below, and add your voice to the chorus of people speaking out in support of Ahed Tamimi, her mother Nariman Tamimi, and the entire Tamimi family.

Last January, I went on a speaking tour with FOSNA that was supposed to include Palestinian teen activist Ahed Tamimi. The tour was titled “Living Resistance: No Child Behind Bars,” and it focused on child detention and mass incarceration from the United States to Palestine. Unfortunately, today, 17-year-old Ahed herself is behind bars due to her activism. She spent her 17th birthday inside an Israeli prison.

Ahed was never granted a visa, so she could not physically be with us on the tour. However, we produced this short documentary of her speaking, in her own words, about her work and daily struggles. The video has been shared worldwide, and has garnered millions of views. Between the tour, which visited 18 U.S. cities in two weeks, and the video, Ahed’s powerful words and story have reached millions of people.

Though still just a child, Ahed has today become a prominent figure of nonviolent resistance, serving a leading role in her community of Nabi Saleh, which has staged nonviolent protests against Israel’s occupation for years. In the early morning hours of December 19, 2017, then-16-year-old Ahed Tamimi was arrested, along with her mother, Nariman, and cousin Nour. The women were arrested after a video of Ahed slapping an Israeli soldier went viral. The soldier had, just minutes before, shot her cousin point blank in the face, and was attempting to enter her home to shoot at other children. Ahed bravely stood up to the soldier, preventing him from entering her family’s home, and possibly saving other young people in the process.

Since her arrest, Ahed’s trial date before the Israeli military court (which has a 99.7% conviction rate for Palestinians) has been postponed multiple times and has been closed off to reporters. Her cousin was released, but her mother is still in prison, and the Israeli army recently arrested 10 other members of her family, including her cousin, Mohammad, who was shot in the face the day she was arrested, and is still recovering from his wounds.

Many Palestinians, including children, are subjected to torture and maltreatment while in Israeli custody. We are concerned for Ahed’s well-being in the Israeli prison, and join the chorus of people around the world demanding her immediate release. And while Ahed is an exceptionally brave young leader, her case is not unique. Hundreds of thousands of young Palestinian girls and women stand up to Israel’s occupation and aggression every day in Palestine. Many are arrested and tortured, without so much as a moment of media attention, for their acts of brave resistance.

Today, I call on women of faith all over the world, from all religious and denominational backgrounds, to join me in demanding the immediate release of Ahed and Nariman Tamimi, as well as the other members of their family.

“We are caught in an inescapable network of mutuality, tied in a single garment of destiny. Whatever affects one directly, affects all indirectly.” —Martin Luther King Jr.